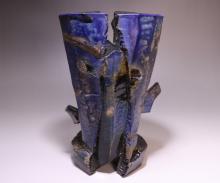 Takashi Baba is a ceramic style that combines sculpture and Bizen ware.
He uses a lot of shavings and patterns to create highly artistic works.
This work is painted black clay and cobalt on the surface.
Furthermore, a bright blue fire pattern is generated by intensively applying a strong fire.
Goma's yellow, black clay, and bright blue are a set and have a very fantastic beauty.
This work is a work of a solo exhibition held in Tokiha, Oita Prefecture in February 2021.

He was born in Bizen City, Okayama Prefecture in 1983.
He graduated from Tokyo University of the Arts in 2006.
Since 2007 he has been working as a ceramic artist in Bizen City. 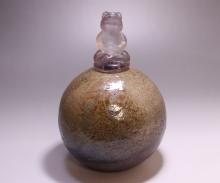 Koji Nakahara is a potter who works in two places, Osaka and Bizen.
He is commissioned to make bespoke tableware by a famous restaurant in Osaka.
And in Bizen, he is learning about Bizen ware from his teacher, Fumio Kawabata.
He uses an electric kiln to turn Hidasuki into a metallic color.
The frog that does zazen was made by melting glass.
It is his original Buddhist frog designed from plaster mold.
He said the frog was a Buddhist mane and had not reached Nirvana.

He was born in Osaka prefecture in 1978.
He became a disciple of Fumio Kawabata since 2001. 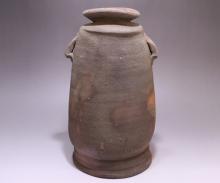 Yuho Kaneshige is the third son of Sozan Kaneshige.
He inherited Inbe's house and kiln from his father.
He was presenting traditional Kaneshige style works.
But around 2018 he started a new challenge.
He demolished the kiln that he inherited from his father and made a more primitive kiln.
This Hanaire was fired around 2000 in the inherited kiln.
The very fine casegoma and the beautiful red clay color are wonderful.
He hates to imitate the style of Toyo and Sozan.
The design of the body and the balance of the rim are his own style.

He was born in Bizen City, Okayama Prefecture in 1950 as the third son of Sozan Kaneshige.
He became his father's disciple in 1975.
He became independent as a ceramic artist in 1980. 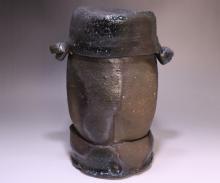 This is a work made about 10 years ago by Ryuichi Kakurezaki.
The collector kept it without opening after purchase.
He uses the same black clay as Jun Isezaki.
He makes works with normal Bizen clay, and paints black clay after drying.
"Kuro" is made of clay with a high iron content in the Osafune district of Okayama prefecture.
Add a small amount of cobalt after dissolving them in water to make it liquid.
The black clay applied to the work changes to beautiful black when fired.
The part exposed to heavy ash is colored cobalt blue.

He was born in Nagasaki Prefecture in 1950.
He graduated from Osaka University of Arts in 1973.
He became a disciple of Jun Isezaki since 1975.
He became independent as a ceramic artist in 1985. 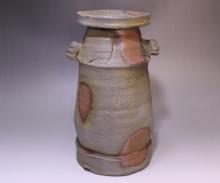 This is Hanaire when Moriyasu Masamune was calling himself Kengo.
It's a work 30 to 40 years ago, and it's his young work, but I'm amazed at the very powerful design.
It's like a Hanaire made by a potter who has been doing pottery for 40 years and 50 years.
Mimitsuke, who is said to be very difficult, has also completed it with this work.
Beautiful scarlet clay color and Kase goma occur throughout the work.

He was born in 1954 in Bizen City, Okayama Prefecture.
He graduated from Okayama prefecture Bizen ceramics school in 1973.
He died in 2006. 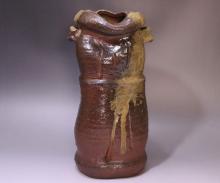 Tomio ochi is a relative of Anjin Abe.
He was an office worker but loved art.
After retiring from the company, he studied pottery as a student at Anjin Abe.
He studied the control of the fire method of the old Bizen from Anjin Abe.
From this Hnaire I feel the essence of sculpture and oil painting he has learned so far.

He was born in Ehime Prefecture of Japan in 1949.
He became a disciple of Abe Abe from 1976.
He made a kiln at the Ushimado in Okayama prefecture in Japan in 1998. 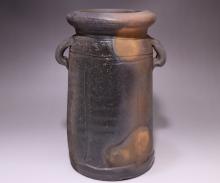 Mitsuru Isezaki is one of the potters who inherited Bizen ware redeveloped by Toyo Kanesige.
His pottery style is simple and undecorated to show off the goodness of the clay.
This Hanaire is his later work.
The beautiful black Yohen and red Botamochi are amazing.
It is a fire pattern that changes from night sky to sunrise.
The motif of the design is "Hukumimi" from old Bizen Hanaire.

He was born in Bizen City, Okayama Prefecture in 1934.
He was recognized as an important intangible cultural asset designated by the prefecture in 1998.
He died in 2011. 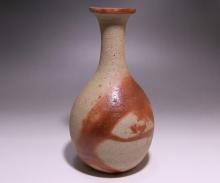 Mitsuru Isezaki is one of the potters who inherited Bizen ware redeveloped by Toyo Kanesige.
His pottery style is simple and undecorated to show off the goodness of the clay.
This Hanaire is his young works.
Hidasuki Tsurukubi hanaire was the highest grade since Momoyama era.
He studied them and reproduced them in his own kiln.
He succeeded in designing a beautiful neck like a crane, which is the etymology of Tsurukubi.

He was born in Bizen City, Okayama Prefecture in 1934.
He was recognized as an important intangible cultural asset designated by the prefecture in 1998.
He died in 2011. 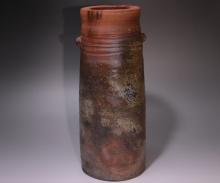 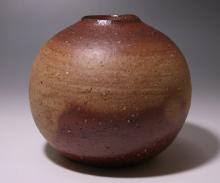 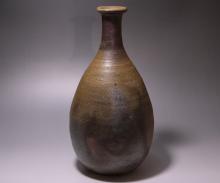 He was born in Bizen City, Okayama Prefecture in 1936.
I graduated from Okayama University in 1959.
He was accredited as a living human national treasure in 2004. 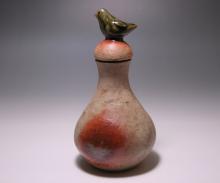 He was born in Osaka prefecture in 1978.
He became a disciple of Fumio Kawabata since 2001.